I love this song whichever angle you approach it from. The lyrics are clever and quirky, it has a great tune, the music builds brilliantly throughout and even the video is pretty good. In fact the album it's from, Different Class (1995) is an excellent all round effort.

Apparently the song is Jarvis Cocker's take on those who attribute glamour to poverty. Well, living in the East End of London you come across a fair bit of that. Wierdly this is a phenomenon amongst Christians of a certain sort, too, who get competitive about how 'poor' the area is where they live. There is definitely some theological reflection that can be done with this song and concepts of 'incarnational mission'. Ultimately, of more concern to the person who takes Jesus seriously, must be the haunting words 'You'll never live like common people, you'll never do what common people do, you'll never fail like common people, you'll never watch your life slide out of view, and dance and drink and screw, because there's nothing else to do.' Now how do you respond to that?

Strangely, I fell in love with this song when it appeared as a karaoke track in the fantastic movie 'Lost in Translation' (2003). I've posted the clip below, and it's sung by the brilliant Bill Murray whose deadpan performance in my humble opinion pips Brian Ferry's original to the post. In the context of the film, and you have to see the whole thing to really get it, the song just hits a nerve that otherwise it's easy to miss. In fact the whole soundtrack to the movie is brilliant and if you persevere through 5 mins of silence on the final track you get Bill Murray's version.

Still, it must be said, the original is still pretty good and it appears on the album Avalon (1982). The wistfulness of it all somehow tugs the heartstrings - like a lament and yet to a strangely upbeat backing. The lyrics state that 'there is nothing more than this' and yet it's more like a question than an answer. Damn right there's more than this and only people who know it can sing this song. 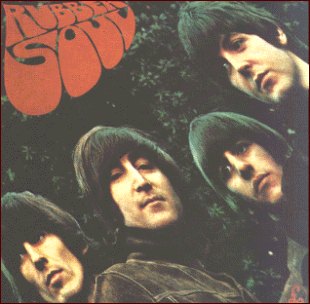 'In My Life' probably isn't my favourite Beatles' song, but it is certainly one of the most lyrically moving and searching. Released on Rubber Soul (1965) it became one of the Beatles' favourite songs. Interestlngly, Paul McCartney once claimed that it was one of only two Beatles songs that he and John Lennon disputed composing (the other was 'Eleanor Rigby'). The lyrics certainly belong to John Lennon, but McCartney claimed the music much to Lennon's annoyance. Ironically, it's the overall sense of connectivity within the song that I like - a sense of a present love that rises above even the best of the past and promises an even better future. For Lennon this was likely a human love, probably Yoko Ono, but take it into a different context and the meaning changes. Johnny Cash's moving version on American IV (2002) gives a tone of regret. Another way of looking at it of course, is to see the present love as that of God. Then it becomes a worship song that could easily be sung in church.

The Killers>All The Things I Have Done

Of all the bands around at the moment, The Killers stand out from the crowd. This became plainly evident to me whilst watching the otherwise dull Live 8 concert in 2005 (good cause of course, but hijacked from the real Make Poverty Campaign and the music got in the way of the issues as well as being decidely mediocre). I'd never even heard a Killers' song before they took to the stage that day. They sang 'All The Things I Have Done' and I was smitten.

Actually, Hot Fuss (2004) is a great album. The best song, 'All The Things I Have Done' has everything - a catchy riff, enigmatic lyrics, a building thumping vibe and to top it off a gospel choir half-way through. The UK video to accompany the track is apparently shot in Brick Lane just down the road from me, so even more resonance for those of us living in East London.

I particularly like the line 'I've got soul but I'm not a soldier'. I'm not sure why. I suppose it's just slightly left-field and in my case not true (in The Salvation Army sense). But the song runs deep - there are many themes there and it can be read as a plea for God's help in the midst of a troubled life. Whatever the writer intends it's a gospel song of sorts - at least that's how I hear it!