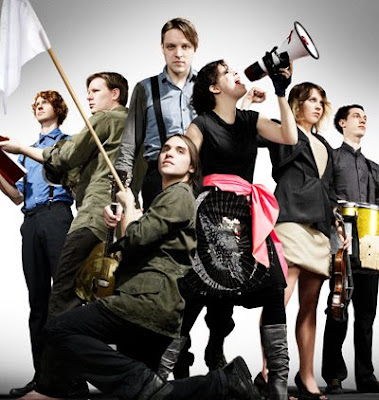 After a year's break - I appear to have come up for air again and climbed back onto my blog (this is my second post in a 2 weeks!). Having a spare 20 minutes I cast my eye over my previous work and on the whole still stand by most of it. Great to read a couple of comments that had sneaked through my radar over the last year. Also, realised that during my silence, I've been listening to more inspirational music than ever, so plenty to share.

Perhaps my personal discovery of the year is Arcade Fire. I enjoyed a corporate worship experience with them back in December at London's O2 venue. The last two gigs I saw at the O2 featured Bob Dylan and Leonard Cohen - two mighty singer-songwriters who will forever be legends. But as good as it was to spend time in their company it was even better to watch a band in their prime and at the top of their game. It was remarkable how they turned such a huge arena into an intimate setting. Simply stunning.

Now I've come late to Arcade Fire. Just don't know how I missed them. However, what's great about discovering a band onto their third album is that instantly you have a decent amount of music to get into. For me, their first album - Funeral - is the best. Their 'anthem' appears to be the song 'Wake Up' from that album. It seems to sum up the general feel of so much of their music. In a recent interview in the Guardian - lead singer Win Butler, brought up in a Mormon household says:

"I had a somewhat religious upbringing," he says. "Not strict, but it was there and I'm kind of thankful for that. If you grow up just watching MTV, that's its own form of religion and it's not even based on happiness or communal responsibility. I mean, try to construct a worldview out of that."

Project that onto the lyrics of 'Wake Up' and the song starts to make sense. Watch what you fill your soul with - fill it with nothing or meaningless rubbish and you're lost. WAKE UP before it's too late! It's a prophetic call to the present Western generation. I defy you to listen to this and not be moved.