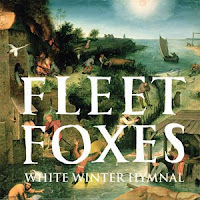 To say I'm bored with the Christmas songs that you find on the radio at this time of year is an understatement (even 'Fairytale of New York' is failing to hit the spot). This year, along with the Cockburn track from my previous post, I've put together a mini-playlist of alternative songs to wile away the Advent nights.

Firstly, the excellent Fleet Foxes' 'White Winter Hymnal' (Fleet Foxes, 2008) is a worth a listen - see video below. I have no idea what it's about - although there are some fairly outlandish theories around on various sites. I pick this for the winter, snow theme and the great sound of the voices. It just somehow gives me that Christmassy - cold on the outside - warm on the inside feeling. The video is great, too.

Secondly, and yes it's Dylan again, 'Three Angels' (New Morning, 1970). My Dad put me on to this one. It is a funny song and I like the little story. Check out the words here.

Thirdly, Teenage Fanclub's 'Guiding Star' (Bandwagonesque, 1991) is a great track off a fabulous album. Yes, the lyrics aren't the best in the world, but if you're looking for something different for Christmas you might like to give it a go and join in the 'communal carol singing' here...

And finally, it appears that Leonard Cohen's 'Hallelujah' is about to become a Christmas number one in the UK after it's been released by the X Factor winner! This song, great as it is, doesn't have that Christmas 'thing' about it - although the words 'Love is not a victory march, but a cold and broken hallelujah' could sum up the circumstances of Jesus' birth pretty well. But I've written about that already.
Posted by Nick Coke at 20:24

If I could be so bold as to plug our new Christmas album consisting of 17 original songs from lots of new indie bands from all over the world including the Cloud Room, Idaho, Jape and the Very Most. http://www.indiecater.com is where you can listen to it all. We think it’s great but then we are biased and obsessed with Christmas.

In the spirit of Christmas I forgive you mp3hugger for using my blog as an advertisement for your CD! Also, having listened online to the CD I must admit it's pretty good...

Yeah, how about that X-Factor winning track? They put in a modulation half way through, add some bells and call it a Christmas number 1.

I suspect you're sick of Christmas music because someone in your house has been playing them since October...