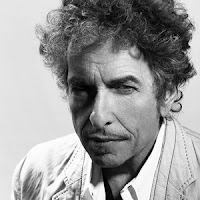 Bob Dylan appears to like ironic titles for his more recent albums. Take his previous release, Modern Times (2006), for example - clearly nothing modern about it since it's a collection of songs (mostly great songs!) based on structures and themes of times gone by. So what should we make of Together Through Life his latest effort? Well, not be taken in by the title that's for sure. I've been somewhat puzzled by a number of reviews that have suggested that Dylan is 'enjoying' himself on this album - I can only surmise that they've forgotten to listen to the lyrics and more importantly his voice. For me, Dylan's voice is usually the key to his albums and on this record it's ragged, scarred and suffering. And that's the image of 'togetherness' that Dylan is projecting through these songs - basically a 'togetherness' that is lost, betrayed and hewn with violence on a personal, spiritual and communal level.

According to his Bobness the inspiration for the album came from the track 'Life is Hard', a song he was recording for a movie soundtrack. The rest of the album followed in a rush, clinging to the coat-tails of this song. It's a terribly sad song that brings tears to my eyes as it weaves a tale about the loss of friendship and love and the resulting emptiness of life. Now, I have absolutely no evidence for what I'm about to write and yes it is a song for a movie, but I cannot help but project Bob Dylan into this song. The fact that this theme is picked up time again across the whole album I believe that Dylan is singing about his own spiritual loss - a dark night of the soul if you like.

Should I be worried for Dylan, then, when I hear this song? Perhaps, but then it's not the last word. A couple more songs to write about later...

The lyrics:
The evening winds are still I've lost the way and will
Can’t tell you where they went I just know what they meant
I’m always on my guard admitting life is hard
Without you near me

The friend you used to be, so near and dear to me
You slipped so far away, where did we go astray
I passed the old school yard, admitting life is hard
Without you near me

Since we've been out of touch I haven't felt that much
From day to barren day my heart stays locked away
I walk the boulevard, admitting life is hard
Without you near me

Bob and I are back!

Well, my two most loyal readers have commented that they haven't heard from me for a while so it's time to put fingers to the keyboard. Now let me say, there's also a VERY good reason to post something and that is that Bob has released a new album - something that was only a wild web rumour last time I put up a post. Today, my CD dropped through the letterbox - one day after release date thanks to our pathetic postal system!

This weekend I had the joy of seeing the great man twice in as many days - once up close and personal in a relatively small north London venue. I loved the gigs and was able to share them with my friend Nick as well as my Mum and Dad, which made them extra special. Dylan clearly gave it everything - not something he always does - but you could see the sweat pouring off him!

Now to the new record - my Dad just called and said there were at least 3 tracks on 'Together Through Life' that would bring tears to my eyes. As I type, I'm having my first listen of the whole album and I must say I'm loving it. And, yes there are tracks that deserve whole posts of their own because they clearly say something about Dylan and God. I endeavour to put them up over the next week, so let's see...
Posted by Nick Coke at 22:04 1 comment: