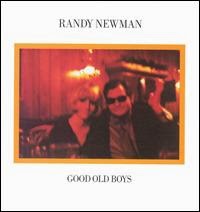 Getting into the whole vinyl thing has re-invigorated my music listening in surprising ways. I've rediscovered the pleasure of the 'hunt'. Setting myself a £5 per record spending limit rules out most record shops as a place to buy LPs. Consequently I'm picking up vinyl from charity shops. I love the feeling of rooting through all the Neil Diamond, Mario Lanza, Val Doonican (just how many records did these guys sell?!), when an interesting record pops into view and my heart skips a beat. With trembling fingers I slip the vinyl from the sleeve to see what condition it's in. With time suspended for a second, either crushing disappointment or absolute elation follows. I've learnt that the sleeve condition rarely reflects what's inside. It's like unwrapping Christmas presents as a kid.

The first listen of 'Good Old Boys' was a strange experience. Naively, I slipped it onto my deck and got it playing with my 11 year old son in the room. Newman's distinctively nasal voice forces it way through the speakers. 'Isn't this the guy who sings the Toy Story song?' asks my son. 'Yeah it is', I reply, whilst simultaneously taking in the lyrics of 'Rednecks' - a song satirizing the racism of America's deep south and the hypocrisy of the northern states. The chorus forces me to lift the player's arm from the record with the disappointment I'd have to wait until he's in bed before I can have a go at this one properly.

Quite how Newman went from 'Good Old Boys' to the Toy Story soundtracks is a mystery to me. But this album is an amazing piece of work - the song-writing is devastating, clever, poignant. I can't think of any current songwriters who might produce art like this. A reflection of a moment in history - 1974 (the year after I was born) - it still resonates today. 'Mr President (Have pity on the Working Man) could be written for the UK 2014. I love this album. In a rather strange way, it feels like it found me.