Joe Hill>The Preacher and the Slave 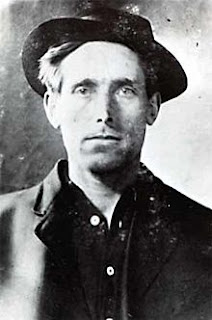 A while back I did a post on songs with Salvation Army connections. Since then I've had a couple of songs I didn't mention brought to my attention: Jonny Cash's 'Understand Your Man' and 'The Bannerman' by Blue Mink. Today, however, I came across what is described as an 'anti-Salvation Army song'. As you can imagine, I found that interesting!

Joe Hill was an American protest singer back in the early 20th century who was involved in union organising with a group known as 'the Wobblies'. He wrote songs to inspire poor migrant workers to rise up and fight for a better life. His beef with The Salvation Army came about because he often found himself competing with the SA band to make himself heard out on the streets. And whilst the Salvation Army sang about a better life in the next world, Joe concentrated on songs that sang about a better life in this world. And to drive his point home he used to take the tunes The Salvation Army were using and rewrote the lyrics! (This of course was The Salvation Army's own tactic - they took tunes used in the public house and put Christian lyrics to them). And so, the song 'The Preacher and the Slave', which mentions the Salvation Army directly, was a parody of the hymn 'The Sweet By and By'. Apparently, this song also coins the phrase 'Pie in the Sky when you die'!

As someone who has become particularly interested in 'organising' as a form of justice in today's world, as well as a Christian commitment to life in the next, I wanted to make a couple of observations about this song. I feel that Hill's point is well made, but is perhaps misdirected. Whilst Salvationists have always had one eye on the hereafter, it would be true to say, too, that the other eye has always been trained on the here and now. Of all Christian denominations, The Salvation Army has been committed to those who need a helping hand in this world. However, Joe Hill could be forgiven for thinking otherwise if all he heard were our songs. Where are the songs, for example, that deal with fighting for justice in this life? Where are the songs that reflect the radical teaching of Jesus about the peacemaker or the prophetic or the 'upside down' kingdom of God breaking into the world around us. Where are they?! On the whole Hill's right - mainly our songs are 'pie in the sky when you die'. And I for one would love to sing a new song - a protest song, a prophetic song, a song that brought heaven to earth as Jesus taught.